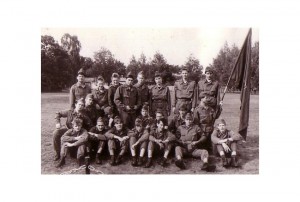 Although I visited several countries after the Wall came down, since I was allowed to do so, I didn’t set foot in the USA. This country had formerly been class enemy No. 1, the imperialist exploiting superpower, the evil. For years they had hammered it into my mind: GDR good, USSR very good, FRG bad, USA very bad. Perpetually, we had to be on the lookout against Jimmy Carter and Ronald Reagan and to be prepared to defend ourselves, like the proud Vietnamese did. Travelling into this country? By my own choice? Never!
However, because of a new job I had to visit this country of the unlimited dumb, greedy for profit American people. Despite the prospect to see New York and San Francisco I didn’t enjoy to pack my bags. This trip would only have one positive aspect, to visit one of my mates from old GDR-times in California. This bastard had changed political wings completely and has been living in San Diego for quite a while.

Our boot camp in 9th grade had not been the first pre-military youth training centre in my life. There had been several Junge Pioniere exercises with the slogan “March for our probation”, where we had to find our way through the woods by using compass and map only. Every twenty minutes a new group started and the first order was “Quick march!” The following assignments were triangle shooting, first aid, to move hand over hand along a rope, hand grenade long throw, and matching maps. At the finish we got tea and solyanka from the field kitchen, and in the afternoon they handed out the badges and certificates on the manoeuvre ball.


In 1986, however, we had to go to the pre-military training camp for two weeks which was run by the East German society for sports and technology. We looked forward to this event, since it was only for the boys, while the girls had to join the boring corpsman class that took place at school at the same time. The guys who didn’t go to the camp because of being in frail health were considered to be the biggest sissies and even the girls laughed at them. The tough guys received their army clothes in the school basement on Tuesday before the trip. On Saturday we met at East Station (Berlin-Ostbahnhof) and felt like elite soldiers of a secret combat unit, since we hadn’t seen each other in these wicked army clothes. The trip to the pre-military training centre took us about one and a half hour. There we met all the other 9th-graders from Berlin and were divided into the different shacks. The competitors of Rosa-Luxemburg-School and the wimps from the school of music Hanns Eisler joined our group of a hundred.
Our petty officer was a chubby man with a rosy looking face who came from Saxony. While at the beginning we had to do 20 press-ups for punishment and long runs through the forests, he became more and more laid-back. Why not? He didn’t have any stress with us. For there were rumours going around the camp that another class had sung the Horst-Wessel-song and beaten up their petty officer so that he ended up in hospital. Consequently, this class were sent home. In contrast to them we were absolutely obedient and good boys. But maybe it was just the case that our petty officer was only too lazy and not in the mood to do more sports. He had to run the same distance as we did and I saw in his face that he absolutely didn’t enjoy it. During the breaks he smoked three cigarettes at the same time where normal people could only smoke one. And although he came from Saxony, he wasn’t about to hassle the boys from Berlin. Luckily, he was a decent and fair superior.

Just before the trip to the pre-military training centre I had seen the movie The Great Escape with Steve McQueen – obviously in the West German TV-channel ARD – and being very enthusiastic about this film I took one utensil with me into the camp – a ball. In the movie it was a baseball which Captain Virgil Hilts “The Cooler King” threw against the walls for hours. My ball was only a tattered, grey East German tennis ball. I took it with me wherever we went, on the marches, to the runs in the forests and to the musters. I was always playing with it.
During a break in the forest Bergi came to me with a massive limb of a tree and asked me to throw the ball. Tremendously he blasted it at least 60 metres away into the woods. Naturally, it didn’t take much time until the others also wanted to have a try. But Bergi used his monopoly position to hand the bat over to only two other people, until he hit it for the second time. My position was even superior – I was “The Cooler King”, since I owned the ball!
We started to play baseball, even though nobody knew the rules. So we adapted the rules from burning ball that we had played several times in PE. One team had to hit and run while the other one occupied the four corners and the rest of the playing surface, then tried to catch the ball as fast as possible and throw it back to the fielder. If the batsman managed to run around the field, he would receive one point. In case the ball reached the catcher earlier or the batsman didn’t stop at one of the corners on time, he would have been out. After one round teams changed positions. Soon we played this wicked game during every single break.
At first our petty officer was lying in the meadow, smoked his cigarettes and watched this horseplay. We really had good fun. Soon some of us turned out to be absolutely talented and real specialists. Some hit the ball very high, far away or very precisely into one corner and it disappeared in the woods. Some others sprinted very skilfully to catch the ball and tossed it directly back to the fielder with enormous power. Moreover, the catcher had already tinkered himself a huge glove. I wasn’t very good at all, neither with running nor with throwing or catching the ball I was a help for my team. Nevertheless, I owned the ball!


On the next day, nearly everybody had his own bat and the following evenings all the boys carved, filed and polished their wooden sticks. After one week most of the clubs looked like real baseball bats. The second day already our petty officer couldn’t just watch the match, he wanted to join. Probably, it was good luck that during his second attempt he hit the ball so perfectly that it disappeared in the woods, and he jogged around the field with a huge smile in his face making his first point.
From now on we didn’t do anything except the official sports competitions, the daily musters, and our baseball matches.
In the middle of the forest we had found a glade where we built our own field having proper corner flags and marking lines. Meanwhile, we all had our own little idiosyncrasies, how to put on the kepi, how to swing the bat or what a cool sentence one had to say before hitting the ball. In the middle of the socialist sister state forest of the GDR we practised an all-American game. We appreciated this unbelievable liberty outside of our barbed wire fenced barracks.

For any reason we didn’t go into the forest on the last but one day of our pre-military training camp and everybody seemed to be very unbalanced and even petulant. Suddenly, some of the boys asked me to go to the sports ground of the camp to play. The news about the match got around rapidly and 20 people grabbed their bats and went to the field. Normally the sports ground was quite crowded with people playing football. But fortunately nobody was there when we arrived. We marked the corners with some pieces of clothing and picked the two teams. During the last one and a half week we improved a lot. Hitting, running, throwing and catching appeared to be very professionally. The kepis and cool sentences were perfectly set. I was in the catching team and concentrated obsessively on the ball and the whole match, like my team-mates. Thus, I didn’t notice that more and more boys from other groups of a hundred came to watch curiously what was going on here. When suddenly Bergi hit the ball fantastically and unreachably for everybody, 300 people cheered from the sides, and I almost couldn’t hide my tears of emotion. Although the match was immediately closed by some officers of the National People’s Army, we had been the baseball playing heroes of the camp for one moment. We had won the hearts of nearly all the people in the barracks.
Every day we were reminded to be prudent and companionable here in the pre-military youth training centre. And they had reached their aims. None of the 20 baseball stars – not even our section commander Lars – had ever revealed that we didn’t do anything else but playing pre-military training camp baseball in these two weeks. With my ball!


At the terminal in Los Angeles my friend Matze gave me a hug and smiled. We went to his gigantic, black SUV, where there was enough space for at least eight people. Then we went straight along the coast to San Diego. A pleasant sea breeze blew from the blue Pacific Ocean and Nirvana was played on the radio as if on cue. My friend pointed at the glove locker. Obediently I pressed the button. Matze knows a lot about me, also that I am a sport fan. However, I hadn’t told him the story of my 9th grade pre-military training camp baseball experience. In the glove locker I found two tickets for the Major League Baseball – a marvellous welcome gift.
.
Read more: Generation Wall
.