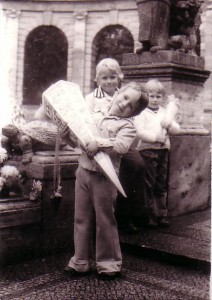 My brother Benny is a pitiful person – a truly sad person having a biography full of misfortune. Being the second born child he should have been a cute Anja, but instead he was the constantly crying and sick Benny. Still today he tries to find out when exactly he was born, how much he weighed and a lot more information to compile his own baby photo album.
That was totally different with me. I had even two baby photo albums. The smallest details were mentioned there: when I passed wind for the first time or how much I weighed after 25 days. One day Benny proudly presented a shoe box filled with “his” photos and wanted to put them in an album, my mother suddenly found out that these photos were the sorted out bad ones of my childhood. Benny was always ignored by cameras.
Nonetheless he grew up in the East of Berlin without having any permanent damage. His lifelong biggest problem remained me – his two year older brother. At school he was quite good, but he followed somebody that belonged to his family who did everything a tick better than he. From the grade point average of 1.5 one received a certificate for excellent learning at a socialist school that was signed by the district mayor and a written notification was sent to the parents’ firm. The names of these children were read out loudly in the firm- and party assemblies and the audience applauded. In the working places of my parents therefore only one son existed and that was obviously me year in and year out. Especially my mother showed quite openly how proud she was of me. Benny was really frustrated, but didn’t expose it.
As a baby he got all the teething problems within three weeks, when he was a little older he shined with a lot of severe injuries. In the long jump from the stool in our children’s room he broke his right arm, being tobogganing on the death track in the park he received a rupture, while ice skating he broke his ankle, and playing football he broke his nose. Furthermore, there were quite some holes in his head after different activities that had to be stitched in hospital. When we passed the hospital by tram he proudly screamed: “I’ve been here before!”, even though he was only 6 years old. He was quite well known there. 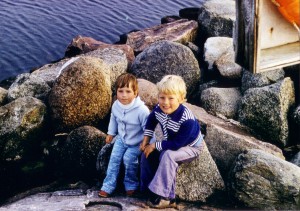 Being the older brother I tortured him quite often, took his head in the stranglehold and only freed him after he had said some magic formula I invented. He always lost the games that he played against me, even though most of the time it was a very close thing. Moreover, I was superior athletically. The girls that phoned at home always asked for me, and my first tongue kiss I received 100 years earlier than him. With my first real girlfriend Babs, that my parents declared to be the dream daughter-in-law, I happily went through life, while he started his career with the merchant fleet and later with the navy. When he came home after six months at sea to celebrate his 18th birthday, my mother expected him with the following words: “Benny, would you please bring down the garbage first and then put off your shoes, as I have just vacuum-cleaned the flat.” In his room the present waited for him: being an adult now he got a book about Alf – the alien.
Without having studied he became unemployed after his seafaring, worked as a caretaker, unemployed again, became a store detective, unemployed and finally started a career as a riot policeman in Berlin – Wedding which is a social trouble spot. However, today he lives near the newly built main airport Berlin-Brandenburg and listens to the airplanes that sing the songs from the wide world.
Once when he was 14 years old he came home from the hairdresser and I didn’t like his haircut and his sideburns. Soon I decided to fulfil what the hairdresser didn’t finish with my dad’s double-blade shaver. I didn’t suspect that my legendary lack of skill also covered haircutting. The only subject at school I was not good had been handicrafts. As I couldn’t manage to draw a clear hairline, he lost more and more hair.

And at this evening he was supposed to affiliate the Free German Youth – the official youth organisation in the GDR. All the teachers and the parents took part in this celebration. Every student was called to the front individually to be welcomed with flowers and Free German Youth ID-card. Finally Benny was called to the front. Standing in the spotlight everybody could see that he definitely had the best hairdresser in Friedrichshain: me.

He had quite a lot of hair in the front, but turning round one could see that he was shaved from the centre of his head. I have never seen this trendy haircut again. In the school hall people started whispering and giggling. I could hear the words “complicated head operation” and “severe car crash”. Of course even one week later Benny cried his eyes out and hardly dared to leave the flat. I felt a little sorry for him, but those are the breaks: life as the younger brother. 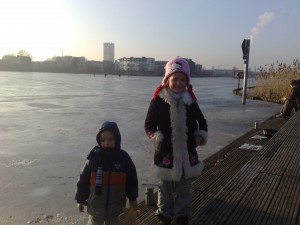 No, double no! The story of my brother is different. Of course he is angry about his non-existing baby photo album. With his own very cute children Laura and Michel I can see myself that he won’t repeat the mistakes of our parents. Both get the same amount of attention by their parents and as I don’t have any children these two super-grandchildren occupy the centre stage of the family universe. Benny who has got a secure civil servant job lives in a nice house directly on the fringe of the forest. The house is really impressive and we didn’t dare to dream of such a villa when we were children. All family parties are celebrated at his castle and not in my hovel in Friedrichshain anymore. Benny obviously made something of his life, just in contrast to me.
Anyway he had been in a much better position than me, he was allowed to smoke and drink much earlier, he could go out longer, and he got earlier and more pocket money. On the dangerous school yard he had his elder brother to look after him. He was a good and much-loved student who sometimes duelled even successfully with his brother. We always loved and helped each other and never peached against the other. He didn’t have to take his A’ levels and directly after school he went to the merchant fleet. One year after the Wall came down he travelled with his ship „Blue Sky“ to Japan, Guam, Micronesia, and Australia, while I stumbled through a changing city called Berlin, confused and disoriented. When I received the postcard from Perth I felt envy and pride for my little brother and big hero at the same time. 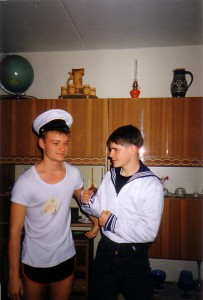 Nobody really understood why our hated neighbouring school “Rosa Luxemburg” always won in every single sporty event of our borough. Year after year it was the same procedure and our school didn’t win any trophy at all, nothing, nil. It seemed as if we had already been separated in the kindergarten: “You are athletic that means you are allowed to attend Rosa-Luxemburg-school and you lame duck there are sent to the Käthe-Kollwitz-school.” Our PE teacher Mr Pinka didn’t even have the problem that we always lost, but he was also confronted with the fact that nobody wanted to take part in any sports event at all anymore to become the 74th. To promote the prestigious 3000 metre cross-country race the teacher promised to give mark one automatically to every student who only takes part in the race without taking any time. Thus, it happened that quite a lot of students participated in this race, just in marked contrast to the other events. This famous cross-country race took place in the park near the duck pond. Every year quite a lot of spectators lined the route. Beside the teachers and parents also other competitive cliques were standing there and slandered loudly.
Since I was in the cool 10th grade I only walked round the duck pond, stopped behind bushes or trees, took a drag or sipped from a bottle of beer that somebody handed to me. One had to be extremely cool. Without losing a single drop of sweat we reached the finish after half an hour and waited for the younger classes. When the 8th grade passed us we couldn’t stop laughing since they still took it very seriously. The last one was Benny, he crept round the corner. He wanted to attract attention by jogging very slowly and easily, similar to his elder brother. I smiled proudly and convinced him to take a short break. When the leading person came along for the second time we sent him to follow. What we didn’t know by this time was that the complete amount of runners had already lapped him twice. Since we didn’t want him to run the laps on his own we started cheering him on loudly. Benny understood at once and ran much faster. 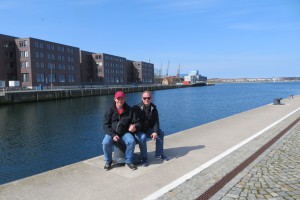 None of us could have known that he suddenly overtook the steeled and completely surprised athlete from Rosa-Luxemburg-school. The referees seemed to be so impressed by our deafening cheers and the dramatically rushing boys that they meant my brother to be the leading one and guided him to the finish. With the last of his strength he stumbled into the red ribbon. Everybody was really happy and occupied the run-out zone. Euphorically we celebrated Benny, the champion of the race. Our school had improved its reputation massively. My little brother was honoured on the next flag ceremony on the school yard. In the gym a huge certificate decorated the wall for a long time.
Mr Pinka couldn’t believe his fortune. Benny Scheppert was the hero of our PE teacher, of the headmaster, of the whole school. Also for me he was, is and will always be a hero, my whole life long.

Read more about my brother and me: GENERATION WALL
.
.
.